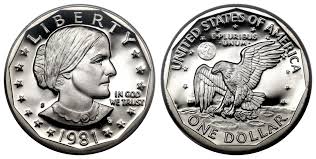 The Susan B. Anthony $1 Coin

Spring Hill Gold & Coin Buyer serving Brooksville is interested in your Coins, Graded Coins, Coin Sets, and more. Including Gold, Silver, and Platinum. Bullion, Coins, and Jewelry. If you are ever unsure of your coins you can always bring them in and we will be happy to go over them with you.

During President Jimmy Carter’s term in office, legislation for the Susan B. Anthony Dollar Coin was passed. Under Public Law 95-447, on October 10, 1978, the bill was passed.

In 1979, the first coin was minted. Frank Gasparro, Chief Engraver of the U.S. Mint designed the coin in its entirety. Both the obverse and reverse sides of the coin. On the obverse, lower right side of the portrait, you can find his initials. (See picture below).

This coin was the first time a portrait of a real woman appeared on a U.S. circulating coin. Lady Liberty, for instance, only depicts a figurative woman. But Susan B. Anthony was a real woman. Who pioneered in equality and the women’s rights movement.

The Susan B. Anthony $1 Coin initially was only replacing the Eisenhower Dollar. However, the U.S. Mint had high hopes that ultimately this coin would replace the $1 Washington Note. Because it is much cheaper to mint a coin than to mint a paper note.

But, in order for this to occur, high circulation of the coin would need to happen. Which, unfortunately for the U.S. Mint, did not happen. In fact, the quite opposite happened. The public rejected the coin. Why? Simple. It was easily confused with a quarter. Thus, production stopped in 1981.

20 years after it’s initial minting, the Susan B. Anthony Coin was struck once again. The United States Post Office requested the coin to be reissued. In 1999 the United States Mint complied. But it was not a repeat minting. More of a one time commemorative minting.

The Characteristics of the Coin

Depicts a design in the likeness of Susan B. Anthony.

Features an American Eagle landing on the Moon. Which is an adaption of the Apollo 11 insignia.

But if you are ever unsure of your coins, you can always bring them in for a FREE valuation. We are ALWAYS buying Gold, Silver, and Platinum Coins. As well as Graded Coins and some raw coins.